Cardiff and Vale of Glamorgan Regional Safeguarding Board / Children Board / Adults, Parents and Carers / Child Sexual Abuse and Exploitation

Sexual exploitation is a hidden form of child abuse and is a crime. CSE involves both male and female children being tricked, coerced or manipulated into sexual acts. It is very unlikely that children who are sexually exploited will tell the adults around them what is going on. This might be because they don’t think anything is wrong or they are afraid.

Children might be given physical things such as alcohol, drugs, trainers or gifts like jewellery by the abuser. The abuser may also draw children in by making them believe they are in a relationship. A child is unable to see that they are being used for sex because the abuser has tricked them or may hold power over them in some way. For example, they may have an explicit photo of the child that they use to threaten them and make them do what they want. This grooming and abuse can start online before happening in person and can take place within groups of friends of a similar age.

These abusers know to target vulnerable children and they are skilled in approaching them and gaining their trust. This makes it difficult for exploited children to see and understand what is happening to them. Children may come across as putting themselves in risky situations, when in fact they are being targeted, controlled, manipulated and used. 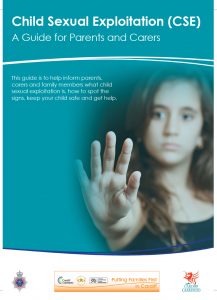